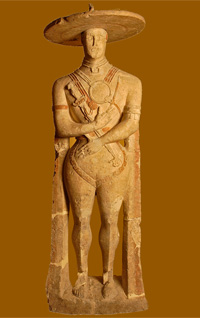 The origin of the South Picene alphabet is unknown. It includes twenty-three signs, seven used to mark vowels; the texts feature punctuation between words, but two inscriptions use scriptio continua. There is no preference in the course or direction of the writing. Two problems arose in the analysis and interpretation of the texts: first, the (apparent) impossibility to decode the writing and second, the difficulties to propose a phonetic value for two signs ('the star' and 'the square') that scholars interpreted differently. The recent identification of the reduction of graphic strokes allowed better understanding of South Picene writing and the reading of the texts without incorrect interpretations of the signs.

The origin of the South Picene alphabet is still uncertain and scholars have different points of views regarding its derivation or its alphabet sequence. A derivation from the Etruscan or from the Greek Euboean alphabet has been proposed: however, it is not clear in which ways these alphabets influenced South Picene.
For South Picene, the difficulties in text interpretation have often required decoding: the writing has been an obstacle that has made the inscribed documents inaccessible and has significantly precluded an appropriate linguistic analysis of the texts. All the same, the decoding of the South Picene alphabet has by now been mostly achieved even if the phonetic value of two graphemes (the sign with a 'star-form' and the sign with a 'square-form') has not yet been universally accepted.
The South Picene alphabet is an homogeneous system with some recognizable varieties. Of the twenty-three graphemes, seven are for vowel sounds ([a], [e], [í], [i], [o], [ú] and [u]).

For the following signs the phonetic value is not accepted by everyone:
- grapheme with a ‘star-form’: : this sign appears only twice in the inscribed text on the stele from Penna Sant'Andrea I (Teramo) (see Examples of writing). In the publication of the South Picene corpus (1985), A. Marinetti proposed an explanation of the grapheme as a sign for the aspirated sound [h], or alternatively, a sibilant sound: although Marinetti chose to transliterate the sign as <ś> the phonetic value remains doubtful. A. La Regina (Il guerriero di Capestrano e le iscrizioni paleo sabelliche, in Pinna Vestinorum e il popolo dei Vestini, a cura di L. Franchi dell’Orto Roma 2010), considering the positions in which the grapheme appears, proposed an aspirated value and transliterated it as < h >
- grapheme with a ‘square -form’:: A. Marinetti (1985) transliterated this grapheme as , however in some places the value of the sign is not clear. The sign, which is also located in post-vocalic position, could be the result of a dental or a sibilant sound and could show the reduction of a diphthong or could have the value of the vowel [í]. A. La Regina (2010), refusing an aspirated or sibilant value, argued a vowel sound and transliterated the grapheme as <ô>.

A peculiar aspect of the South Picene alphabet consists in the reduction of the signs, i.e. a simplification of some graphic strokes. Some strokes of the graphemes for a, q, t, í, are reduced to points and also the graphemes o and f (an eight-shaped form in the Etruscan model) are reduced to a point. From the earliest discoveries scholars noted the presence of many points in the sequences: three superposed points (⁝), two superposed points (:) and a single point (.). In 1962 G. Radke (Umbri, in Pauly-Wissowa IX suppl. 1962, coll. 1764-1781) identified the single-point as the reduction of the grapheme for the vowel sound [o]. Starting from this hypothesis A. La Regina interpreted the two points superposed as the reduction of the two circular elements that constitute the Etruscan grapheme for [f]. The reduction that involves these two graphemes goes in the same direction as the stroke reduction that involves the graphemes for a, q, t and í.

SUMMARY SCHEMA OF THE REDUCTION PROCESSES FROM THE ETRUSCAN MODEL TO SOUTH PICENE:

This phenomenon corresponds to a graphematic logic that considers the limits of any non-economic homographies within an alphabetical system. The lack of the simplification of the central stroke of grapheme u is significant because if it had occurred, it would have created a situation of homography with the grapheme for a. The reassessment of the values of the signs for o and f has also led to a reconsideration of the function of punctuation: previously it was assumed that it had a morphological-syllabic value or that it was used as an abbreviation. Once the correspondences: single point = grapheme for o and two points superposed = grapheme for f was confirmed, the function of punctuation as a division between words was also confirmed in South Picene writing. Punctuation consists of three points superposed, but there are some exceptions: in the South Picene corpus there are two inscriptions in scriptio continua (the inscription on the Warrior of Capistrano and the inscription on the pyx from Campovalano) and there is also an inscription in which vertical strokes were used as punctuation (inscription on the stele from Falerone).

Almost all South Picene inscriptions were written on stone. These were inscribed mostly on large sandstone stelae now more or less fragmentary and written on one or more sides of the monument. Sometimes they show some iconographic elements representing human figures (as in the case of Bellante's stela) or only the human face as in both stelae of Penna Sant'Andrea (Teramo - see Writing Examples). An extraordinary find is the statue of the Capestrano Warrior (see Writing Examples) in which the text runs along a very important iconographic monument.
Texts are also inscribed on other objects, such as a cup (found in Campovaldo), a bronze bracelet found in the Pescara valley (see Writing Examples), and bronze helmets (see the helmets found in Bari and Bologna both showing short inscriptions). It is very difficult to date these objects; few monuments have been dated. For the Capestrano statue, the middle of 6th century B.C. has been proposed, for the Penna Sant'Andrea inscriptions, 5th century B.C.; and for the two helmets a date between the 4th and the 3rd century B.C. has been proposed.


Direction and course of the writing

South Picene inscriptions show no preference in writing direction; writing runs to the left or to the right, on one or more lines, boustrophedically or pseudo-boustrophedically. Often the graphemes are turned upside down, although the base of the letters follow the direction of the writing. The arrangement of the letters in the space used for the writing is used with a variety of solutions; however the tendency is to adapt the texts to the support (this is evident in the Bellante inscription, in which the text runs around the human figure).
The texts are very accurate: the three inscriptions from Penna Sant'Andrea show great attention to layout, design and the use of space (see Writing Examples).