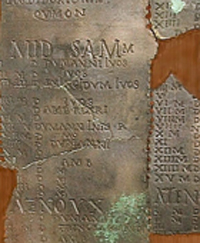 The Gaulish language is known to us thanks to several hundred inscriptions transcribed in three different graphic systems:

- the Etruscan alphabet, giving rise to Gallo-Etruscan epigraphy, the oldest. It is found in northern Italy, on the right bank of the Po. These inscriptions should not be confused with the Lepontic inscriptions ;

- the Greek alphabet, giving rise to Gallo-Greek epigraphy. It is found mainly in southern Gaul in Provence and up the Rhone valley, but also occasionally in central Gaul;

- the Latin alphabet, giving rise to Gallo-Latin epigraphy from the turn of the era. It is then found throughout Gaul until the Gaulish language disappeared in favour of the Latin language.

In each of these scripts, the language remains Gaulish, a continental Celtic language, no doubt with dialectal variants which are, at present, difficult to determine because of the fragmentary nature of this epigraphy.

There are half a dozen inscriptions in Cisalpine Gaul. Gallo-Etruscan inscriptions are concentrated around the city of Lugano (for this reason, it is sometimes called the "Lugano alphabet"), in Northern Italy.

This must be distinguished from the Lepontic epigraphy. The Gallo-Etruscan inscriptions are Gaulish written in an alphabet that does not distinguish voiced and voiceless stops.

Nasals before stops are very often missing. There are two types of sibilants.

In the Gallo-Etruscan corpus, two of the three stone inscriptions are bilingual Gaulish-Latin (Todi and Vercelli), and these inscriptions can be dated to at least the second part of the 3rd c. BC.

Chronology: end of the 3rd-1st BC.

The Gallo-Greek inscriptions are concentrated around Marseilles (but none was found in Marseilles) and in the the Rhône River delta.

The oldest ones have been found in Gallia Narbonensis. Atila's gravestone, (2nd quarter of the 2nd C. BC), erected after the cremated body was buried in Marduel (Sernhac, Gard) is, according to Michel Py, the oldest Gallo-Greek sepulchral inscription known in Gaul.

The corpus is mainly composed of inscriptions on ceramics (more than two hundred fragments), but also funeral stones (around 70 items known) and ten or so inscriptions on various supports.

The most recent inscriptions were found in east-central France and are datable from the 1st c. BC

The Gallo-Latin alphabet was the result of an adaptation of the Latin alphabet to the Gaulish language. It was mostly used just after Caesar's conquest of Gaul. It is mainly found in Northern and Central Gaul.

A few letters, such as the tau Gallicum (θ or Ð), have been borrowed from Gallo-Greek, attested in the Rhône River valley.

There are very few Gallo-Latin inscriptions on stone.  The Coligny calendar is important, but most of the documentation is on instrumentum. Artefacts from everyday life (pottery, spring scales, spinning wheels, pots, spoons, etc.) bear modest inscriptions, fragmentary and quite often uncouth. Pierre-Yves Lambert suggests that it was a humble and "popular" epigraphy.