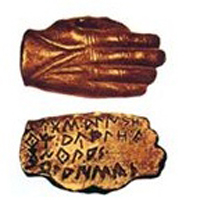 The Celtiberians occupied the northern plateau of Central Meseta in the Iberian peninsula during the second Iron age.

Celtiberian is the language they spoke; their presence is attested as early as the 4th c. BC but the language is attested epigraphically only from the 2nd c. BC. It seemed to be spoken and written homogeneously but only in limited areas.

One of the original features of Celtiberian epigraphy lies in the use of a semi-syllabic script to transcribe an Indo-European language to which it was not at all suited initially. Indeed, the Celtiberians borrowed their script from their Iberian neighbours, probably the Edetani, during the 3rd century BC.
This borrowing gave rise to two graphic variants: the eastern Celtiberian script and the western Celtiberian script, distinguished from each other by differences in the notations of the nasals /n/ and /m/.

Furthermore, within these two variants, the difference between the voiceless and the voiced is noted by the addition of diacritical marks, according to what has been called the “dual system”. The use of this system by the Celtiberians gives an indication of when they may have borrowed the script from their Iberian neighbours.
There are four sets of inscriptions: the eastern inscriptions (dual and non-dual) and the western inscriptions (dual and non-dual).
Finally, some Celtiberian inscriptions are written in the Latin alphabet. During the discovery and study of the Novallas bronze (2013, 2021), a new letter was discovered: it is an s with an additional lower stroke which seems to correspond to the sigma of the Iberian script and is transcribed by a ś.