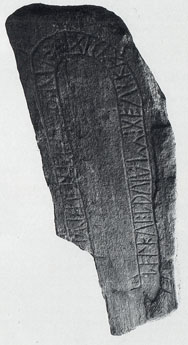 Lepontic is named after the Lepontii, a group of people that, according to ancient sources, occupied the Southern region of the Alps during the 1st millennium B.C. An echo of their presence in this area still survives in today’s Levantine valley, in the Canton of Ticino (Swiss) and in the lake region in Italy.

The classification of Lepontic within the Celtic family and, more precisely, its relationship to the Gaulish dialectic variation called “Cisalpine” has been the object of much controversy among scholars. At present the general opinion is in agreement with the thesis of Michel Lejeune, who in 1971 classified Lepontic as the oldest attested Continental Celtic language on the basis of some common isoglosses to other Celtic languages. On the other hand, a minority of scholars supports a more recent (1998) position by Joseph Eska, who claimed that Lepontic was not an independent language, but rather an ancient form of Gaulish, a dialectal variation of north Italy. The dominant opinion up to the ‘70s was instead that Lepontic was an Indo-European language similar to Ligurian.

The Lepontic language, of which only about a hundred terms have been identified, is known today thanks to the findings of about 150 inscriptions that date from between 6th century B.C. and 1st century B.C., in the area between Lugano, Lake Maggiore and Lake Como. These inscriptions indicate a two-phase linguistic development: a more ancient phase, archaeologically corresponding to the final part of the so called  “Golasecca culture” (named after its epicentre in the province of Varese), and a second phase that began ca. 400  B.C. with the invasion of the Po valley by Gauls bearing materials of the La Tène culture. For this reason, inscriptions in Gaulish language but using the Lepontic alphabet can be found in the Lepontic area.

Although a mechanical division between the two languages is difficult since they share many common features, nowadays it is conventional to consider only those inscriptions found within 50 km of Lugano as Lepontic, whilst  those outside that area are considered as belonging to the Cisalpine Gaulish dialect. The corpus Lexicon Leponticum cautiously considers as definitively Lepontic only those inscriptions in Cisalpine Celtic prior to 400 B.C.

The Gaulish invasion marked the beginning of the process that led to the extinction of Lepontic. At first, Lepontic was assimilated into the Gaulish language. Then, after Rome conquered Cisalpine Gaul, Lepontic was completely absorbed into Latin until it totally disappeared.

Our actual knowledge of Lepontic derives from inscriptions that are very short: a word, usually a proper name, with at most seven words in the longest inscription. They are incised on worked or rough stones and on pottery. The corpus mostly includes funeral inscriptions but also object ownership inscriptions; there are also 17 coin legends and two dedications.

The Lepontic inscriptions are almost all incised in an alphabet derived from Etruscan, known as the “alphabet of Lugano” (the name of the area of provenance of most of the epigraphs) or "Lepontic alphabet". This alphabet is one of the many writing systems derived from a Northern (or North-Italic) variation of the Etruscan alphabet.

One of the features of this kind of alphabet is the use of a single phoneme to indicate graphically the voiceless and voiced occlusives. In order to show the ambiguity of the sound, in the transcription the upper case is conventionally used in the transcription for the following letters: P for p/b, T for t/d, K for k/g.

A careful examination of the inscriptions indicates a probable two-phase development of the alphabet: the most ancient phase dated to the 6th- 4th century B.C., and the more recent phase was marked by the influence of Gaulish between the 4th and the 1st century B.C.

In the first phase, the alphabet had 19 signs that were still very similar to the archaic Etruscan. These included the digamma (v), the circular dotted theta and three signs that note a voiceless sibilant: the ‘butterfly’ san (ś), the sigma with three bars and the sigma with four bars. The vowel o was also employed, which was not used in Etruscan and therefore it is believed to be of Greek influence.

In the second phase, in which the alphabet was used to transcribe the Cisalpine Gaulish language, digamma and theta disappeared and there was a change in shape of the vowel a, which becomes similar to an inclined digamma.

Double signs were used neither for consonants nor for vowels, and the vowel quantity was not specified, so vowels can be interpreted as short or as long. The signs for /i/ and /u/ were also used to denote the semiconsonants /j/ and /w/.

The writing direction was mainly right to left, but there are examples of writing that runs left to right. There are also a few boustrophedon inscriptions.