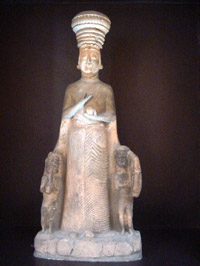 The Phrygian script is classified as Old Phrygian (8th-4th century BC) and Late Phrygian (1st-3rd century AC) according to two different corpora of documents.

Old Phrygian is an alphabetic script similar to the ancient Greek alphabet from which it derives and with which it shares seventeen signs. Other signs, often used in specific geographic areas, have a value that is still under discussion. There are many variations for each sign. Notwithstanding the hypothesis of a Greek origin, it has also been proposed that the Phrygian script comes from the Phoenician alphabet, around the eighth century, in the same period when the Greek script developed. Part of the inscriptions are written from left to right, part are boustrophedon. Words are divided with points, very rarely used in graffiti as well.

Examples of this script are preserved in 395 inscriptions dating between 800 and 330 BC. The inscriptions, with rare exceptions, come from the area between Dorylaion (Eskişehir) and Kerkenes Dağ (possibly ancient Pteria). The earliest inscriptions in a local alphabet date from the 8th century BC and are on stone or pottery from the Gordion area. At this stage or in the final part of the 9th century this alphabet may have developed through contacts with south-eastern Anatolia (Ciliacia). In this same area the Greeks may have adapted their language to the Phoenician alphabet.

This would be the area where both languages, Greek and Phoenician, would have adapted the Phoenician alphabet to their respective needs. It is still difficult to establish whether this development was simultaneous, or whether it could be postulated that Greek influenced the formation of a Phrygian alphabet or vice versa. However, the Greek alphabet has some characters in common with the Phoenician alphabet that are missing from the Phrygian one, so the question is not resolved.

The late Phrygian script was clearly a Greek alphabet of seventeen letters. There were not word divisions. It is a writing system used only in funerary contexts to express curses at the end of a Greek text.

The corpus of texts is restricted to 118 inscriptions of a funerary character and related to curse formulae, added at the end of Greek epitaphs. The chronological span is limited to the 1st and 3rd centuries AD. All the inscriptions were found in the western area of Phrygia.

Finally, there is the inscription of Dokimeion, which is defined as mid-Phrygian and consists of an epitaph composed of six hexameter verses. It is dated between the 4th and 3rd centuries BC and is considered the first Phrygian inscription in the Greek alphabet.

Possible origin of the Phrygian script

The first documents in Phrygian alphabetic writing were found at Gordion, the ancient capital of the state, and date back to the last phase of 8th century BC. They are 5 documents from a mound called MM and a document from the city contemporary with this mound. Other texts belong to the seventh century. B.C., and the largest corpus is dated to the period from the sixth to the fourth century. B.C.

Although the similarities between this system and ancient Greek are relevant, commercial and cultural contacts between Phrygians and Greeks in the eighth century were rare. However, historical sources of Greek origin attributed to Midas, the Phrygian king, a trip to Greece, to Delphi, and the marriage to a princess of the Greek city of Kyme in north-western Anatolia. This could show that the Phrygian script did not develop through trade relations but from a cultural choice to develop an alphabet, freely based on the Greek system. A second hypothesis is that it was picked up from an original source, common to both alphabets, represented by Phoenician writing.

This alphabet is actually similar but not identical to Greek especially in some local variations. Signs otherwise unknown were found in Gordion, in the site of the city of Mida, and in Çepni but also in Hattusa, the ancient capital of the Hittites, where Phrygians settled after the city was abandoned.

There are not similarities or contact with the writing systems of Anatolia in the second millennium, nor with the Anatolian hieroglyphic widely used during the same historical period in Anatolia and northern Syria.


Use of the script

Phrygian texts, especially the graffiti on vases of various materials, consist of proper names. The few long inscriptions engraved on stone are associated with religious practices. An inscription that probably features historic content comes from Tyana. It deals with the king Mida. There are about 250 Phrygian inscriptions but only two of them have more than ten words: they are the inscription of Germanos (B-01) and the inscription of Yazιlιlikaya (W-01).

It is not known if this script was used on perishable writing boards, like papyrus, leather, and waxed wooden tablets. These latter were surely in use in second millennium Anatolia.