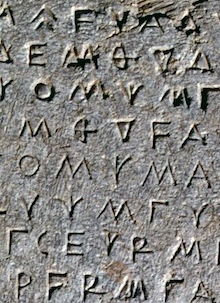 Detail of the bilingual inscription in Greek and Carian from Kaunos

The script is close to the Greek alphabet that was similar to a version used in Alicarnassus. It is still not clear for which reason Greek symbols were adopted with different phonetic values. Inscriptions found in Egypt are usually engraved from right to left. Inscriptions found in Caria read from left to right, in scriptio continua, without divisions between words.

A first step towards deciphering the script was taken by the Englishman John D. Ray in 1981. However, it was not until 1993 that a definitive decipherment took place, when Ignacio J. Adiego and Diether Schürr independently but simultaneously came to understand many phonetic values of the graphic symbols used in the Carian script.

The first researcher to make a survey of Carian inscriptions and the Carian writing system was Archibald Sayce. He supposed that this system was based on a mix of Greek and Phoenician alphabets, and that some signs came from an Asian syllabary. Bork instead claimed that the script was syllabic and tried to distinguish between alphabetic and syllabic signs. He proposed that these latter came from the Cypriot syllabary. He also tried to show the membership of Carian to a group of Old-Caucasian languages together with Sumerian, Elamic and Mitannian, Lycian and the language of the Cypriot-Minoan inscriptions. According to several scholars his system, even though successful, could not be classified as a real decipherment (Friedrich, Kleinasiatische Sprachdenkmäler, 1932).

The finding in 1949 of a long inscription in Kaunos was a turning point. The philologist Th. Bossert was able to see that the writing system was composed of less than thirty letters and this could only be a proof that the system was an alphabet. The Russian scholar Ševoroškin definitively demonstrated that it was an alphabetic system and that the language was part of the Anatolian Indo-European languages. A bilingual Carian-Greek inscription found in 1996 was further proof of the correctness of this method.

Another important moment for the decipherment of Carian was the employment of the bilingual texts found in Egypt to understand Carian writing and language. The first one to propose this approach was the Egyptologist J.D. Ray, who suggested the use of those inscriptions with foreign onomastics within the Egyptian as being possibly Carian. This method was adopted by D. Schürr and Adiego. In this way of comparing texts it was possible to ascertain that the phonetic values used by Carian were different from the ones of the Greek language.

Carian has been reconstructed thanks to a number of inscriptions in the Carian alphabet, mostly from Egypt. There are 170 inscriptions, especially funerary documents. There are also graffiti on boards of various kinds. In this last case the use of the script is not very precise. Funerary and votive inscriptions reveal a correct and standardized use of the script. The majority of them come from Memphis and Sais. They can mostly be dated back to the pharaoh Amasis (sixth cent. BC) but some inscriptions could be older. The oldest was found on a figurine of Isis dated back to the seventh century engraved with the name of the pharaoh Psammeticus I. Inscriptions from Abu-Simbel can be connected with the military expedition of Psammeticus II against Nubia (591 BC).

30 inscriptions in the Carian alphabet come from Caria. Among them the most important were found in Kaunos: a decree (C.Ca 2), a proxeny decree for two Athenian citizens written in Greek and Carian. A syngeneia decree promoted by the satraps Idreius and Ada was found in Mylasa in the temple of the god Sinuri.

Some inscriptions come from neighboring regions of Lycia and Lydia, and from Greece. Carian inscriptions were published in two articles by Louis Robert and Louis Deroy. Thanks to these works there is photographic documentation as well as hand copied versions of the texts.

Notwithstanding this variety of local alphabets it is possible to propose a common origin on the basis of the same phonetic values assigned to letters coming from Greek. This equivalence can be explained only with a common origin.

Inscriptions from Egypt feature homogeneous signs, and variations can be attributed exclusively to the better or worse accuracy of the inscriptions preserved as graffiti. The most complete inventory of the signs of the Carian Egyptian alphabet comes from the inscriptions of Memphis (Saqqara). The precise origin of the Carian mercenaries in Egypt remains unknown. However Adiego suggests they originated from the west coast of Caria from which there are currently no epigraphic finds sufficient for a correct reconstruction of the writing system. It is more difficult to propose an Egyptian origin of the Carian alphabet.