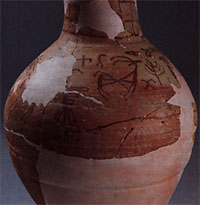 The Proto-Canaanite script is a linear consonantal alphabet (abjad). It offers a mono-consonantal grapheme for each consonantal phoneme, without indicating the vowels. The direction of the writing of these inscriptions is not always certain.

It is possible to identify a development in the script from the earliest inscriptions, with more pictographic signs, to the later ones, with more linear letters. Owing to the small corpus of Proto-Canaanite inscriptions (less than 30), however, it is not possible to reconstruct the native language of the authors of these inscriptions.

The form of the signs of the Proto-Canaanite inscriptions were still variable and not so standardized as the later Phoenician script. Sometimes signs were reversed or presented a very different degree of rotation, some signs developed significantly in their form. Also the direction of the writing is not always the same: the Proto-Canaanite inscriptions can be written from right to left, from left to right, or vertically.

According to the opinion of J. Naveh (1987, 42), the transition from the so called “Proto-Canaanite” script to Phoenician script occurred “in the mid-eleventh century B.C.”, when the signs and the direction of writing became wholly stabilized. This dating should be moved to the beginning of 10th century BC as some recent discoveries (among others, the Tel Zayit abecedary, the ostracon from Khirbet Qeiyafa, and the inscribed fragment of a pithos from Ophel) show signs were not standardized until that more recent time.

The limited number of Proto-Canaanite inscriptions prevents a complete decipherment of the script. It is probable that these inscriptions represent the writing of the local West Semitic dialect spoken during the second half of the 2nd millennium B.C., but it is not possible to say much more.

Two rather long inscriptions are very important because they preserve a fairly complete list of signs. One is the ostracon from Izbet Ṣarṭah – a five-line writing exercise containing a list of signs with many mistakes, perhaps used to write a non-Semitic language. The other is the Tel Zayit abecedary – a recently-discovered, two-line inscription carved on stone dating to 10th century B.C. and very similar to later Hebrew writing.