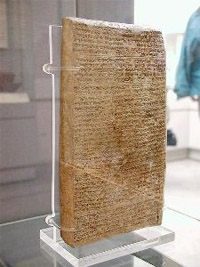 The script used to express the Hurrian language is the syllabic cuneiform of Akkadian origin. It follows the rules and the modes of the scribal chancelleries in which Hurrian texts were produced. The scribes of these schools were not necessarily used to speaking this language. It was in fact largely employed as a written language by several populations of the ancient Near East (especially the Hittites).

Documents in Hurrian script can be dated from the end of the third millennium to the end of the second millennium BC. The most important written text for the reconstruction of the features of the Hurrian script used in the Mittani kingdom is a letter found in El Amarna sent by the Mittanian king Tušratta to the pharaoh Amenhotep III and entirely written in the Hurrian language (14th cent. BC). Some Hurrian documents from Ugarit are written in the local alphabetic script.

Characteristics of the script

It is not easy to give a definition of the Hurrian cuneiform script since archives of Mittani have still not been found. Mittanni was the main Hurrian state of the late Bronze Age and flourished in northern Syria between the 15th and 14th centuries BC. The capital city of this state, Waššukanni, is today identified with the Syrian site of Tell Fecheriye in the area of the Habur River, but excavations have not yet confirmed this hypothesis. On the basis of the Mittani Letter and some documents found in the Hittite capital Hattuša but written in a script different from the usual Hittite script, it is possible to speak about the existence of a Mittani scribal tradition and an “Assyrian-Mittanian ductus” (G. Wilhelm, “Zur Babylonisch-Assyrischen Schultradition in Hattusha” ICH 1, 1990, 83-93).

New studies have been conducted in recent years on Mittanian writing and palaeography that have highlighted the scribal tradition of the area conquered and politically controlled by the kingdom of Mittani before its fall to the Hittite ruler Šuppiluliuma I. Such research has shown that a typical Mittanian script existed in Syria and upper Mesopotamia as far as Aššur, an Assyrian city that briefly fell under the control of the Mittani kingdom (Z. Homan, Mittani Paleography, 2020, 270-278).

The most important document for the reconstruction of the Hurrian writing system is the Mittani Letter, certainly written by a Hurrian scribe from this kingdom. In this text logograms are extremely rare. It is mostly a syllabic script. Syllables are of the Consonant/Vowel (CV), Vowel/Consonant (VC), Consonant/Vowel/Consonant (CVC) kind. The number of syllabic symbols is limited: 41 CV signs, 31 VC signs, 26 CVC signs, some of them with double value (har/hur, kal/tan). The scribe did not consider the differences between signs expressing voiceless and voiced consonants, but always chose the sign PA (never BA), KA (never GA), DA (never TA), DU (never TU). Much more precise is the vowel system: The sign U is always used for the sound /o/ and the sign Ú is always used for the sound /u/. Also the distinction between signs with vowels i and e is accurate.

The Hurrian language is known most of all thanks to the documentation coming from territories of the Hittite state (15th-13th cent. B.C.). For this reason the graphic system of the texts found in Hattuša is largely influenced by the conventions used by the Hittite scribes for writing texts in several different languages. This graphic system is thus quite different from that of the Mittani Letter. For example it does not consider the difference between the signs U and Ú in rendering the values of the vowels /o/ and /u/ or the use of KU for the sound /ko/ and GU for the sign /ku/. Also, in rendering the occlusive consonants, Hittite scribes did not follow systematic criteria. This may depend on the different scribal habits of the scribes of Hattuša but also on a different perception of the sound of this foreign language. A typical element of the texts from Hattuša is the addition to the labiodental fricative PI (used for the sounds wa, we, wi, wu) of a subscribed vowel to indicate the sound of the syllable (PIe >wee, etc.).