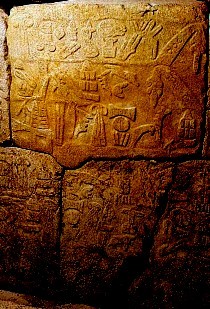 Anatolia hieroglyphic, or Luwian hieroglyphic, is a writing system attested in Anatolia and Syria between 14th and the 7th century B.C. In the last phase of the Late Bronze age it was used by the Hittites and other inhabitants of Anatolia in glyptic and in monuments. After the end of the Hittite domination, in the Iron Age, hieroglyphic script continued to be employed especially on stone inscriptions (9th - 7th century B.C.). Each word was a combination of signs vertically assembled and disposed on horizontal lines. They were organized in a boustrophedon manner on the writing board.

- Determinatives: logograms used, like in the cuneiform system, to determine the semantic field to which words pertain.

Origin and possible kinship of this writing system are at the moment unknown. David Hawkins suggested a connection with the systems of the Aegean word and in particular with the Cretan hieroglyphs that seems to have had a parallel typological development to Anatolian hieroglyphs (Melchert 2003, 168).

However, considering the lack of proofs, it is only possible to state that the Anatolian Hieroglyphic script was a creation of the Luwian population of the late Bronze Age.

Already in the 19th century several stone inscriptions had been discovered in the Anatolian-Syrian area. In 1876 the English Assyriologist and archaeologist Archibald Sayce defined them “Hittite”.

Today, we know for sure that these inscriptions are in the Luwian language. Important progress for the decipherment of the Anatolian hieroglyphic script had been obtained in the ’30s by the scholars Ignace J. Gelb, Emil Forrer, Helmut Bossert, Bedrich Hrozný and Piero Meriggi.They were able to identify numerous logograms, whose reading in Luwian language remained, however, mostly unknown, as well as to propose the phonetic values of several syllabograms. Decisive for the decipherment was the discovery in 1946 of the Bilingual Text of Karatepe, an extensive document in Luwian hieroglyphic and in Phoenician script through which it was possible to confirm the readings of many signs and to extend the knowledge of the vocabulary thanks to the comparison with the Phoenician version.

Besides these inscriptions new data was produced by the discovery of digraph seals in Ugarit. Thanks to these improvements, in 1960 Emmanuel Laroche published a fundamental work Les hiéroglyphes hittites and soon after P. Meriggi published the Hieroglyphisch-hethitisches Glossar (1962) and the Manuale di Eteo geroglifico (1966, 1967, 1975). In this work Meriggi presented an edition of all the texts known until then with transliteration and translation.


Chronology and location of the inscriptions

The oldest evidence of Anatolia Hieroglyphic script is on the bullae of seals reporting names and titles of court officers and of the members of the royal family. Seals of the kings are usually digraphs, thus having a cuneiform inscription in the external ring and hieroglyphic symbols in the central field.

The most ancient stone inscription goes back to Muwatalli II (13th cent.) in southern Turkey by the site of Sirkeli. Shortly after there is the representation of the royal couple Hattušili III and Puduhepa in Fraktin (Turkey). In these cases they are reliefs with the names of the sovereigns with their epithets. More complex is the inscription found in Aleppo, Syria, with the dedication of a temple to Hepat and Šarruma done by Talmi-Šarruma king of Halep and cousin of the king Hattušili III.

The majority of inscriptions of the Hittite period, however, comes from the reigns of the last two kings of Hattuša, Tuthaliya IV and Šuppiluliuma II. They are monumental inscriptions accompanied by the description of some military enterprises.

Among the most important documents of the period of Tuthaliya IV there are the inscriptions on the altars of Emirgazi and the inscription of Yalburt in southern Anatolia. In Hattuša there are steles and stone monuments with the name of the king in hieroglyphic Luwian. The inscription of Hattuša located in the area called “Südburg” in room 2 of the monument goes back to the epoch of Šuppiluliuma II. An image of the king is preserved and is accompanied by an inscription reporting his military campaign in southern Anatolia. Still in Hattuša there is the inscription of NiÅŸantaÅŸ, unfortunately badly spoiled, that describes the conquest of Cyprus and has, perhaps, a correspondence in the cuneiform text KBo 12.38. This text reports the acts of Tuthaliya IV and his son Šuppiluliuma.

The corpus of inscriptions of the 1st millennium B.C.

At the beginning of the 12th century the á¸ªattuša archives ceased to exist. For this reason we lose all further information about the reigning dynasty. The cause of the collapse of the Hittite empire is still not clear. After a transition phase, to which pertain the inscriptions of á¸ªartapu, a possible descendant of the Tarhuntašša dynasty, on the mountains of KaradaÄŸ and KizildaÄŸ (11th century), there is a large use of the Luwian hieroglyphic script in the so-called Neo-Hittite states, small political formations of southern Anatolia and northern Syria.They are usually dedicatory inscriptions and they are engraved on the palace monumental gates or on steles.

In particular in this new historical situation the city of Karkemiš, the old administration centre of the Hittite empire in Syria, gained power. Governed by members of the Hittite royal house, it offered dynastic continuity in the first millennium as well. From the excavation of this site come the inscriptions of the two reigning dynastic lineages: the House of Suhi (10th century) and the successive House of Astiruwa (9th -8th century). Inscriptions in Syria had been found also in Aleppo (Halpa), Tell Ahmar (Masuwari), MaraÅŸ (Gurgum), Amuq (Patina), Hama (Hamath). In Anatolia there are inscriptions from Cilicia, in particular from Karatepe (Poenician-Luwian bilingual text), Malatya (Malizi) and from Tabal (in southern Anatolia) whose kings claim to be descendants of Hartapu.

From the site of Assur come letters in Luwian hieroglyphs on lead strips. They are the remains of correspondence exchanged with Karkemiš.