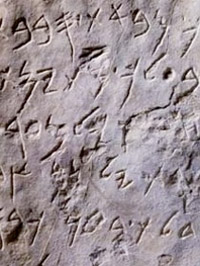 Of Phoenician origin and alphabetic nature, the Ammonite writing system is composed of 22 linear consonant signs, written from right to left. Ammonite appears to be deeply influenced by Aramaic both on the palaeographical and the lexical level, notwithstanding a certain freedom in some graphical solutions (for example, the  ‘ayn tending to a square). Epigraphic records include mostly seals; a few fragments of inscriptions, carved on stone and metal, and some ostraka, reporting catalogues of names, might be added. By the end of the 6th century BC, Ammonite is completely graphically assimilated to Aramaic writing, and it dies out, both as a spoken language and as a writing system.