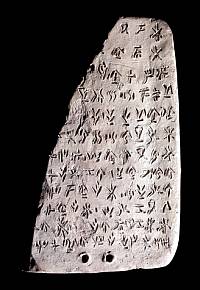 The Cypro-Syllabic script is, as the name itself indicates, a writing system of a syllabic character found in Cyprus during most of the first millennium BC. Its repertory is composed of 56 signs, with more or less important local variations in the form of the signs and in the chronology. Almost all the signs (with the exception of je) are found in the most widespread version of the syllabary, known as the “common syllabary”.
Texts written in the common syllabary are usually right to left (sinistroverse), and their distribution area is quite large: they can be found in nearly the entire island, with the exception of the south-western region (the Paphos region), characterised by its own peculiar repertory known as the Paphian syllabary. This latter is usually used in left-to-right (dextroverse) texts; we know its chronological evolution, even if in an approximate manner: the Ancient (or Archaic, or Old) Paphian syllabary is used essentially in texts dating from 6th century BC, and the Late (or New) Paphian syllabary, in documents dating above all from the 4th century BC.
Two languages at least were written with the Cypro-Syllabic script:
- the Greek language, in the Arcado-Cypriot dialect form, which was introduced in Cyprus at the end of the second millennium BC;
- a local language, which is usually called “Eteocypriot”, probably a pre-Greek language; although readable, the Eteocypriot inscriptions are still undeciphered. The corpus of the Eteocypriot inscriptions is in any case limited in number (a few score of texts), in geographic extension (almost all the documents come from the Amathus area) and in time (they are almost all 4th century BC).
From the 6th century BC (as far as can be determined from currently available documentation) the Greek alphabetical script appeared in Cyprus: it was employed exclusively to express the Greek language (never Eteocypriot), and it was sporadically used until the full Classical Age. The use of the syllabary began to decay in the second half of the 4th century BC, disappearing completely during the Hellenistic period. There are some digraphic inscriptions, written in Greek, in both the Cypro-Syllabic (Cypriot dialect) and the alphabetic script (koine Greek), and a few bilingual inscriptions in Greek (alphabet) / Eteocypriot (syllabary), or Greek (syllabary) / Phoenician.
The surviving texts are of different types, but a great majority of them are votive and funerary inscriptions; the texts of a public character are few. The greatest majority of the known texts is engraved on stone; there is also a certain number of painted inscriptions or graffiti on pottery, while the inscriptions engraved on other mediums (metal, hard stones, ivory) are definitely rarer.
The deciphering of the Cypro-Syllabic script was not the work of a single scholar, but of a series of trials and small advances, at the beginning by scholars of different specialisations, and only later by philologists and experts of the Greek language. Starting from a famous bilingual text of Idalion the Assyriologist George Smith carried out a first attempt at interpretation in 1871, later developed and improved, thanks also to the Idalion tablet, by the Egyptologist Samuel Birch (1872), the numismatic J. Brandis (1973), the philologists Moriz Schmidt, Wilhelm Deeke, Justus Siegismund (1874) and the dialectologist H.L. Ahrens (1876).
The Aegean origin of the Cypriot syllabary has been recognised since the end of the 19th century, following the studies of Arthur Evans on the Cypro-Minoan syllabary, the direct ancestor of the first-millennium Cypro-Syllabic script.