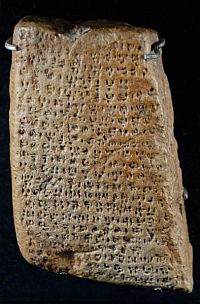 Cypro-Minoan is the name used for a group of scripts, closely connected by a number of similarities, found mainly in Cyprus during the Late Bronze Age (1600 – 1050 BC). The name Cypro-Minoan was created by Arthur Evans in 1909 and since then has been largely accepted and used (although criticisms and alternative proposals exist). It indicates a direct link between these scripts and the Cretan script (the Linear A). All the same, there is not total agreement about this in the scholarly community.
The Cypro-Minoan script is still undeciphered. Without bilingual inscriptions, and with a reduced corpus of documents (little more than two hundred, for the most part very short), every attempt at an even partial interpretation is premature.
On the basis of the available documents four different scripts have been identified:

− Archaic Cypro-Minoan, or Cypro-Minoan 0 (CM 0), documented by a single text, a tablet from Enkomi dating from the end of 16th century BC and with three lines of script (23 signs in all); it is the Cypro-Minoan script that shows the greatest similarities with Linear A.

− Cypro-Minoan 1 (CM 1), attested all through the Late Bronze Age: it is employed for different kinds of texts, mostly very short, inscribed on various mediums.

− Cypro-Minoan 2 (CM 2), found on three fragmentary clay tablets coming from Enkomi and dating from the 13th – 12th c. BC: they bear texts of a certain length, written in continuous script by an apparently expert hand.

− Cypro-Minoan 3 (CM 3), documented by texts coming only from Ugarit, dating from the 13th century BC, which reveal a certain influence of the cuneiform Ugaritic alphabet.

The Cypro-Minoan inscriptions are written on various mediums: the longest texts are inscribed on clay tablets and cylinders, whereas the inscriptions on clay balls or metallic weights are normally composed of only a few signs. Inscriptions on different mediums such as ivory, ceramic, etc. are also known.
Among the most important experts of Cypro-Minoan scripts are Emilia Masson, Paolo Meriggi, Thomas G. Palaima, Nicolle Hirschfeld and Jean-Pierre Olivier; the last published a repertory of Cypro-Minoan texts, with a critical edition of all the available documents and an extensive analysis and systematisation of the repertory of signs, which is to this day the principal reference work: Olivier 2007. More recent are the works of Silvia Ferrara (2012 and 2013), Philippa Steele (2013a and b, 2018), Miguel F. G. Valério (2016), and Massimo Perna (2020), who is preparing a new corpus of Cypro-Minoan texts.