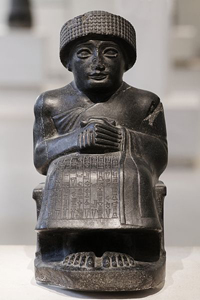 Definition of "cuneiform" and type of writing system

Scholars call the Sumerian writing “cuneiform” because of the wedge-shaped signs (from Latin cuneus). The shape of the wedge originates from the impression of a reed stylus on the wet surface of a clay tablet. A cuneiform sign may be made of one or more wedge-shaped indentations. The wedges may be horizontal, vertical, diagonal, and Winkelhaken. The sign called Winkelhaken was obtained by a vertical impression on the clay by the tip of the stylus. The Sumerian cuneiform is read from left to right; however, in the oldest stages of the script, from the end of the fourth millennium BC to the Old Babylonian period inclusive, the signs, which were written in columns, were read from top to bottom and from right to left. Progressively, the signs were turned 90 degrees left. The writing is constituted by about 600 signs.


Cuneiform writing and the Sumeric language

The first stage of cuneiform writing in Sumer, which is documented in the period between c. 3500 and 3000 BC, uses a script that is ideographic and does not allow the identification of any language. This first form of writing is defined as “Proto-cuneiform”, as the signs have not yet assumed the characteristic “nail shape” typical of the cuneiform and reproduce the object in the form of a drawing. The first tablets, which bear only numerical signs, are followed by numerical-ideographic tablets. This system was clearly devised as an accounting and administrative tool, not as writing to record a spoken language. After this proto-literate phase, characterized by the use of around 900 signs, a phase takes over in which writing, which is configured as a logographic system, records phonetic elements identifiable as belonging to the Sumerian language: this is the phase of the documents from Jemdet Nasr, dating from the 31st or 30th centuries BC. A progressive simplification of the number and of the shape of signs takes place over the following centuries. The cuneiform script which resulted from this development, apparently more appropriate to register Sumerian than Semitic languages because of the presence of monosyllabic words and of agglutination, is also inadequate to represent the phonetic peculiarities of the Sumerian language itself, since the writing was originally created for administrative bookkeeping. In fact, some important morphemes of the language are not represented in the script. Reconstruction of Sumerian phonetics is based on syllabic lists and Sumero-Akkadian bilingual vocabularies, glosses, non-orthographical or syllabic writings. There are four vowel sounds in Sumerian (a, e, i, u) and sixteen consonantal sounds (p, b, t, d, dr, k, g, l, r, s, š, z, h, m, n, ĝ). Differently from Akkadian, there are no emphatic sounds in Sumerian. Instead, the specific sounds of this language are the phonemes [dr] and [ĝ].


Peculiarities of the Sumerian cuneiform

Sumerian cuneiform is a mixed system of syllables and logograms. The cuneiform signs may be of different types: logograms, when they represent words; syllabograms, when they represent syllables; determinatives or semantic classifiers, when they represent conceptual categories of reference and classification of the words. To make the reading of these graphemes easier the scribes often added a grapheme used as a phonetic complement. Given the logo-syllabic nature of Sumerian writing, every word could be written with a sequence of syllabograms or with a corresponding logogram. The main principles ruling the cuneiform system are homophony and polyphony: when the same sound may be represented with different graphemes, then there is homophony; when the same sign may indicate different sequences of sounds, then there is polyphony. These different sequences of sounds are said to be phonetic values (e.g. the sign GUB may be read both with the value gub and the values ĝen, du, de6, túm, rá, re6, laḫ5). As a rule, the homophonous graphemes are distinguished in transliteration by means of accents and subscribed numbers according to the following order: the sign most frequently attested has no diacritical marker (e.g. du), while the second and third signs are respectively marked by acute and grave accents (e.g. dú, dù). Finally, the other graphemes are marked by subscribed numbers (e.g. du3, du6, du7, du8, du10, du11).


Decipherment of the Sumerian Cuneiform

The decipherment of Darius’ trilingual inscription at Behistun (western Iran), written in Old Persian, Elamite, and Akkadian (see Akkadian Cuneiform section), permitted the understanding of the logographic system ruling the cuneiform script and laid the foundations for the identification of Sumerian. The cuneiform inscriptions, found during the archaeological excavations in southern Iraq in 1855, attested a new and unknown language. The Irish clergyman Edward Hincks (1792 - 1866), who worked on the decipherment of the Behistun inscription and gave a fundamental contribution to the decipherment of Akkadian, was the first to suspect a non-Semitic origin for cuneiform, since this type of writing was formed by syllabograms whose phonetic values could not be explained through a comparison with known Semitic languages. In other words, he understood that cuneiform was created to write a non-Semitic language. He also recognized the agglutinative character of this new language. The French scholar Julius Oppert (1825 - 1905) suggested that Akkadian had been preceded by a non-Semitic idiom whose speakers were the real inventors of the cuneiform writing. During the second half and especially the end of 19th century, numerous inscriptions written in a non-Semitic language were found in sites of southern Iraq, such as Nippur, Larsa, Uruk, and Lagash. In 1869, Oppert named this unknown and untranslated language “Sumerian”. With the discovery and the study of the language of the Sumerian texts from southern Babylonia, and the publication of the first lexicographical works, sign-lists, and text editions concerning the Sumerian language (by P. Haupt, E. de Sarzec, F. Delitzsch, R. Brünnow, and F. Thureau-Dangin), Joseph Halévy’s interpretation that Sumerian was nothing more than a “secret code” was definitively rejected.