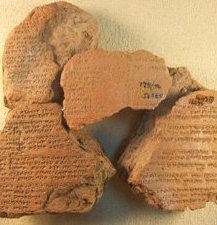 Fragments of a bilingual text in Hittite (right column) and in Luwian (left column).

Cuneiform Luwian was written by the scribes of Hattuša using the same kind of cuneiform script (originating from an ancient Babylonian writing system) used in the composition of texts in the Hittite language. Like in the Hittite cuneiform system there are syllabic signs, Sumerograms, Akkadograms and determinatives. Texts are mostly of religious content. The first compositions from the Hattuša archives date back to the middle Hittite period.

At present, no texts in the Luwian language or in cuneiform script have been found outside of Hattuša. It is believed that the Luwian people were originally settled in western and southern Anatolia. They would gradually spread throughout Anatolia and over time became the predominant linguistic group (13th century). Recent studies have shown that, despite the fact that all available documentation comes from the capital of Hatti, it is possible to distinguish regional dialect variations.