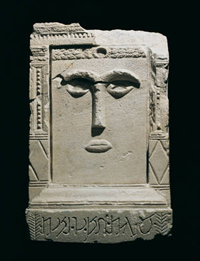 Nabataean dedication to the goddess of Haiyan (Petra, I cent. B.C.)

The first examples of the Aramaic script date back to the beginning of the 1st millennium B.C. It seems it was first employed to draw up official statements on inscriptions in the area of Northern Syria and South-eastern Anatolia.

During the 1st millennium A.D. Aramaic script developed a series of suprasegmental diacritics, aimed at better describing the phonetic structure of the word. These diacritics include marks for vowels.

The first examples of the Aramaic language (10th-9th century B.C.) were in the beginning noted down in a kind of script very similar to if not identical with Phoenician (“Phoenician-Aramaic Script”, Naveh). The adoption of the Phoenician abjad by the Aramaeans is demonstrated by the evidence that the latter uses the 22 consonantal graphemes of the Phoenician script even though the Aramaic language had more than 22 consonantal phonemes. In some instances two different Aramaic phonemes had to be written with the same Phoenician grapheme. Another theory maintains that the Aramaic script originated from Canaanite prototypes and independently from Phoenician models. According to this theory, the overwhelming prevalence of the Phoenician script in official epigraphic documents could have hidden the earlier stages of the development of Aramaic script.

The scribal activity of the royal courts of the Aramaean kingdoms of Northern Syria and South-eastern Anatolia led to the progressive transformation of the “Phoenician-Aramaic” script in a fully “Aramaic” script by the middle of the 8th century B.C. According to Naveh, from this period up to the 4th century B.C. we have two kinds of Aramaic writing: a “monumental script” and a “cursive” script. The first is encountered mainly in official lapidary inscriptions and epigraphs, while the second is found on both official and non-official records, literary texts and the like.

After the fall of the Aramaean kingdoms due to the Assyrian conquests and the diffusion of Aramaic in large areas of Syria, Palestine and Mesopotamia, the Achaemenid empire (550-330 B.C.) extended its supremacy over the Near and Middle East. The Persians chose Aramaic as the official language of their domain, thus fostering the production and spread of Aramaic texts from Egypt to Afghanistan, from Anatolia to the Arabian Peninsula. In this framework Aramaic cursive reached the peak of its development, especially as regards the models directly derived from imperial chanceries. The prestige of Aramaic cursive led it to influence the forms of contemporary Aramaic monumental script. The Aramaic cursive of the Achaemenid period is well documented by the Egyptian papyri of the 5th and 4th centuries B.C. Together with other documentation found elsewhere, they testify to the adherence of the local scribes to well established imperial Aramaic script patterns.

The conquests of Alexander the Great (died 323 B.C.) put to an end the Achaemenid empire and paved the way for Greek culture in the Near East. In regions where Aramaic was not the spoken and written language of most of the population (e.g. Egypt), it was soon replaced by Greek, especially in official documents. On the other hand in Syria and Mesopotamia, Aramaic continued to be used extensively, while Greek flanked it as the language of the new elites. Meanwhile the monumental Aramaic script disappeared, as it was increasingly subject to the influence of the cursive script. From that time on, the cursive Aramaic script shaped all written examples of Aramaic language. After the decline of the writing patterns of the Persian imperial chanceries, Aramaic cursive was adopted and progressively modified by various cultures, giving birth to the Aramaic scripts of the Hellenistic and Roman periods. Textual evidence for the first part of this period (3rd-1st century B.C.) are rather scant if compared to the evidence from the earlier period.

Western Aramaic scripts include the Square script (see “Hebrew”) and the Nabataean script. The Nabataean script is documented in nearly 4000 inscriptions of various length and kinds, as well as in a little but important group of manuscripts. The Nabataean script was used from the 1st century B.C. to the middle of the 4th century A.D. and developed in the framework of the Nabataean kingdom, which was annexed to the Roman empire by the Emperor Trajan in 106 A.D. The cursive tendencies of this script, together with the shape of certain signs, have led many scholars to point to the Nabataean script as the origin of Arabic script prototypes.

In the North-Mesopotamian branch the Hatran Aramaic script holds a position of prominence (sites of Hatra, Assur, Qabr Abu Nayf, Gali Zerdak, etc.). The city of Hatra used to be one of the leading centres of the area between the 1st and the 3rd century A.D., both because of its important shrine of the Sun god and for its military significance as stronghold on the Western fringes of the Parthian Empire. The Hatran script does not show tendencies to develop a ligatured ductus and maintains the dimensions and shapes of the signs throughout its history. Even though the large majority of the texts using this script comes from Hatra, it cannot be ruled out that the place where it originated was actually Adiabene, a thriving kingdom which developed during the 1st and 2nd century A.D., with its capital in Arbela and deeply influenced by Jewish culture. The international prestige of the Hatran Aramaic script is well testified by the inscriptions found in the sites of Armazi (Georgia) and Garni (Armenia).

The Southern branch of Mesopotamian Aramaic scripts includes the Square script of the Jewish communities of Sasanian Babylonia, the script of the coin-legends of the kingdom of Characene (3rd century A.D.), the monumental script of the rock reliefs of the kings of Elymais (2nd century A.D.) and the Mandaic script. The Mandaic script takes its name from being found mainly in the religious texts of the Mandaeans, a gnostic sect whose members still live in the marshes of Southern Iraq and in the countries where they emigrated in the 20th century. The first Mandaic texts known to us are the ones written on incantation bowls dating back to 5th century A.D. The oldest Mandaic manuscripts date from the 16th century. The Mandaic script has developed a cursive, ligatured ductus and has systematized the use of matres lectionis.

The Aramaic incantation bowls are peculiar examples of various Mesopotamian Aramaic scripts (5th-7th century A.D.). These earthenware vessels are actually inscribed in ink with exorcisms, apotropaic formulae and the like and their wide diffusion among the various Mesopotamian cultures and religions of the period is nowadays indisputable.

The texts on the bowls are mainly written in Jewish Babylonian Aramaic, Syriac and Mandaic. As regards the scripts, they provide a precious inventory of Square script, Mandaic and Syriac handwritings. Syriac texts are written in two kinds of Syriac scripts: the estrangela and “pre-” or “proto-Manichaean” scripts.


The Aramaic Script in Iran and Central Asia

During the Achaemenid period (about 550-330 B.C.), Aramaic became the language of the Persian imperial government and it was thus widely and extensively employed in various kinds of texts even in the most remote districts. This phenomenon led to the adoption of the Aramaic abjad by people speaking other non-Semitic languages.

Even if this process began under the rule of the Achaemenids (550-330 B.C.), the first evidence of an Iranian language (Parthian) written in Aramaic script dates back to the Arsacid period (see e.g. the Greek-Parthian bilingual inscription on the statue of Heracles from Seleucia on the Tigris, 2nd century A.D.). The success of the Aramaic script in the Iranian linguistic milieu is witnessed by the fact that the Parthian, Middle Persian, Avestan and Sogdian scripts derived from Achaemenid Aramaic prototypes. Furthermore, the Syriac “proto-Manichaean” script of the Mesopotamian incantation bowls seems to be at the roots of the script used in 9th-10th centuries A.D. in Central Asia to write Manichaean texts in Middle Persian, Parthian, Sogdian and Old Turkish languages.

The principle ruling the use of Aramaic scripts for Iranian languages is the principle of heterography, i.e. the scribe writes down an Aramaic word in Aramaic script but, when reading it, he reads it as an Iranian equivalent. Even though Iranian words increasingly entered the texts over the centuries, heterography continued to be employed for a long time. Aramaic words became in fact similar to ideograms in the long run and, during the Sasanian era (after the first quarter of the 3rd century A.D.), they were flanked by components of Iranian morphology in phonetic script.

Various forms of Aramaic script were transmitted to the Turkish cultures of Central Asia through the Iranian populations (6th-8th centuries A.D.). The Turkish language of the Uyghurs and other Turks was written thanks to the Manichaean script, derived from Syriac prototypes coming from Mesopotamia. A vertical Uyghur variant of the Sogdian script, the latter in its turn derived from Aramaic prototypes, was employed in Genghis Khan’s court (13th century) to record a Middle Mongolian variety. An analogous script, descended from the same model, was chosen to write the official Manchu language.