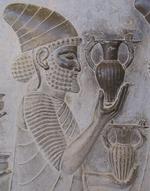 Lydian is an alphabetic writing system and consists of 26 letters. The alphabet is closely related to the Greek from which it may derive unless they share a common origin. In particular it has been assimilated to the Greek alphabets of Eastern origin or "blue".

Lydian script survives through a hundred inscriptions, most of which are funerary. The oldest inscriptions were the ones found in Izmir, which go back to the eighth century BC, and the one found in Egypt dating back to the seventh century BC. This latter is probably a funerary stele erected by a Lydian mercenary. Later texts derive from the site of Dascylium (Ergili) and testify settlements of the Lydian population in that area of northern Turkey. No inscription is long enough to definitively decipher the language.

Funerary inscriptions were usually engraved on the doors of the rock tombs in the necropolis of Sardis and near the temple of Artemis. They have the form of a curse against those who damage the tomb and violate its content.

The oldest inscriptions are written both left-to-right and right-to-left. In later texts the writing is always right to left. In some cases word dividers are used..

The majority of the inscriptions come from Sardis and in particular from the area of the necropolis and the temple of Artemis.

Most of the inscriptions in Lydian are on gems, seals, vessels and coins and consist of a single word engraved on the support.

There is a consistent group of funerary inscriptions on stele, whose formulas are repetitive, therefore they are easily understandable: the inscription bears the name of the buried and a formulaic curse.

Some difficult inscriptions concern the religious sphere. Two of them refer to dispositions for a certain priest, Mitradastas.

There are seven inscriptions that could be poetic because they seem to follow a metric system that has been compared to the iambic rhythm. The texts are difficult both for the number of hapax legomena they contain and also for the syntactic structure.

The two inscriptions with Greek texts are dedications to Artemis.

Of the two inscriptions in Aramaic, one is almost completely lost. The second inscription is rather well preserved. It is a marble stele from Sardis. The text of the bilingual inscription was discovered in the archaeological area in 1912. This inscription is particularly difficult because the Lydian is not yet fully deciphered but also because the Aramaic version has some words that are obsolete and of foreign origin.