Palaeohispanic epigraphy is rich and varied [see the map of the distribution of inscriptions]. No fewer than five graphic variants exist in the Iberian Peninsula from the 7th century BC.

- The most widespread variant is the so-called "Levantine" or "North-Eastern" variant. Documented from the País Valenciano in Spain to the shores of the Gulf of Lion in France, it is used to record a non-Indo-European language used as a lingua franca: Iberian. It is the best known of the Paleohispanic languages and scripts.

- It is possible that the southern writing variant (which is read from right to left) was also used to record one (or more?) Iberian languages. Inscriptions in this graphic system are rare and the signs very variable. They have been found in the eastern part of present-day Andalusia. Not all of them are yet well understood.

- The 'Greco-Iberian' script refers to the occasional use of an Ionian alphabet to write the Iberian language in the 4th century BC at a few sites around Alicante.

- The so-called "Southwestern" variant, sometimes also called "Tartessian script", is attested in about twenty sites in southern Portugal (Algarve and Baixo Alentejo). It is a writing system that is read from right to left and is "redundant" (syllabic signs are doubled by vowel signs). The few stelae that bear inscriptions of this type are in a language that is not yet clearly identified.

- Celtiberian scripts (eastern and western) were used to record the Celtiberian language.

Finally, from the time of the Roman colonisation, the Latin script was sometimes used to write the indigenous languages (Lusitanian, Celtiberian), or for some rare bilingual inscriptions.

It is difficult to define the genre of a text in Paleohispanic epigraphy. Indeed, access to the lexical part of the language is still very limited and it was only from the (already hypothesized) knowledge of some morphemes, which were identified recurrently on similar supports or in analogous circumstances, that a typology of inscriptions could be established.

Moreover, this method may lead the researcher astray, as it encourages granting a specific function to a text due only to the presence of a morpheme and may tend to create false categories. That is the reason why this typology is mostly established based on the support materials and from parallels in others fragmentary epigraphy.

There are three main fields of use of Paleohispanic scripts: economic, religious and diplomatic/political.

- the commercial part, referring to trade. Mercantile marks and contracts come within this category. The most famous lead plaque, from Pech Maho (IGF 135), belongs to this type of writing, and although not written in Iberian but in Greek, it mentions Iberian names. Other lead plaques (such as the one from L'Escala, Ampurias, BdHesp GI.10.11 = MLH III, C.1.24), can be considered letters, but their sense is lost to us,

- the productive part, referring to production and creation of things. Amphora stamps come within this category,

- the economic part, in the etymological sense of the term. This refers to the administration and management of a house. This category includes inscriptions of the organization, distribution and use of goods. Property marks are in this category.

The religious field can be illustrated by funeral stones or objects with a ritual character (such as the rhyton from Ullastret [BdHesp GI.15.09 = MLH III, C.2.8] or the inscription on grey clay from La Joncosa [BdHesp B.11.01]). In the same category, one can put the rock inscriptions from Cerdanya, which reflect a local and probably votive (de Hoz 2011, 432) use  nearly inexistent anywhere else in Paleohispanic epigraphy.

At the present time, there are no known Paleohispanic literary texts. 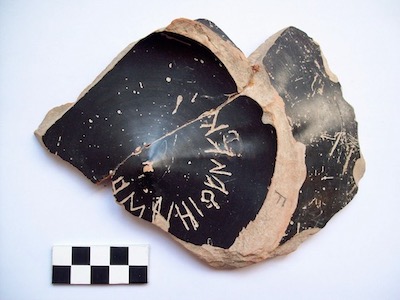 Source : Coline Ruiz Darasse, by permission of the National Museum of Ensérune. 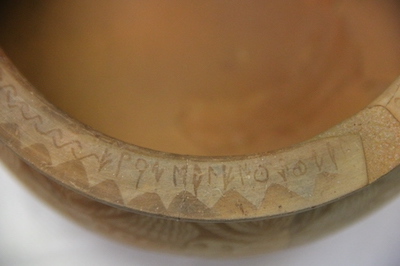 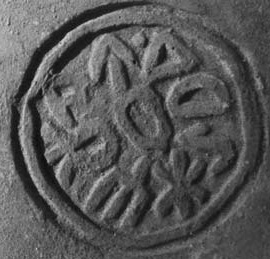 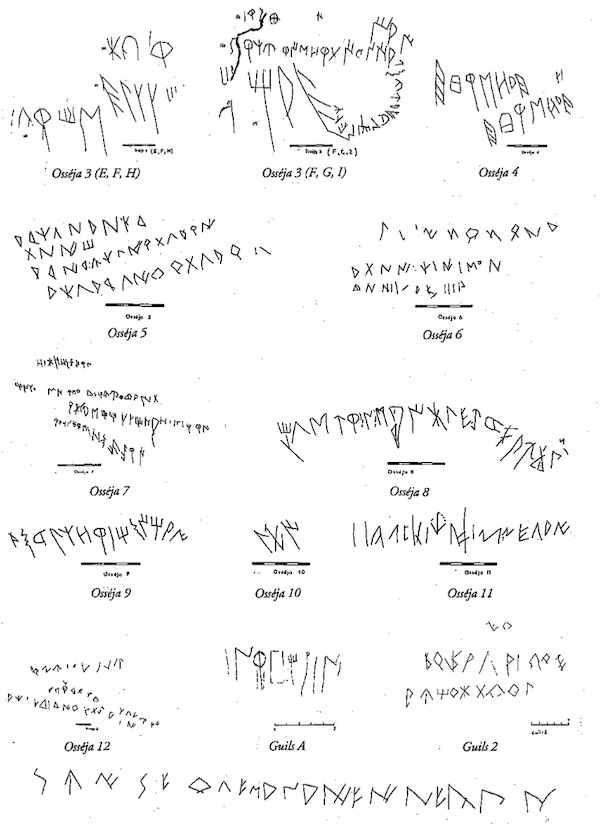