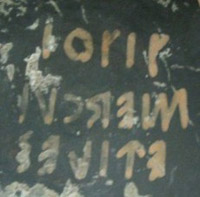 Writing was transmitted to the Faliscans rather early through the mediation of the Etruscans, and was shared in the earliest phases by their neighbours of the Capenian area, who probably spoke a Sabine dialect.Writing arrived not later than the end of the 7th century BCE, as the earliest known documents show; but it is probably to be moved up at least to mid-7th century, as there are some graphic phenomena present in the earliest texts that result from an earlier evolution.

This is the same period of the codification of the Latin writing system (except for the isolated example of the olla from Gabii), but Faliscan writing evolvedindependently. A recent hypothesis attributes an important role in the promotion and spread of writing in the Faliscan and Capenian area to the Faliscan town of Narce (Maras, forthcoming).

The alphabet used to transcribe the Faliscan language is the same used for the Etruscan language, but complete with the letters for voiced stops (G - D: as far, B is not attested) and for O—which were not used by the Etruscans—and lacking the letters for aspirated stops (χθ φ), apart from a few exceptions, usually of the later period, presumably due to Etruscan influence.

The form of the letters follows the graphic tradition of Veii—the closest Etruscan town—and secondly of Caere: it is worth highlighting especially the multi-linear form of S (with four or more bars), that is typical of Veian writing.Further Etruscan influence is apparent in the use of gamma (C) both for the voiced and unvoiced stops /g/ and /k/ (the latter alternative to kappa), as happens in Latin, and in the use of qoppa (Q) in front of the sounds /o/ and /u/. On the contrary, the lack of use of digamma to the advantage of U even in front of vowels distinguishes Faliscan from Etruscan writing.

Finally, a unique peculiarity of Faliscan and Capenian writing is the arrow-shaped sign, used to mark the labiodental spirant /f/ in the earliest texts and persistently used in Faliscan epigraphy until Romanization. The introduction of such a sign solved very early the problem of the missing sound, which was still marked in Etruscan writing in the late 6th century BCE by means of the digraph hv (or alternatively vh).

Arrow-shaped F, multi-linear S and some sparse presences of aspirated stops (theta, chi and phi, under the Etruscan influence) are the main original differences of Faliscan compared to Latin writing. But the divergences increase in the course of time because the Faliscans did not follow the late-archaic reforms of the Latin alphabet, such as the left-to-right direction of writing and the 4-bar form of M.On the other hand it is worth highlighting the parallel evolution of R towards the two-tailed form of Latin writing already in 4th century BCE.

The working alphabetic model can be reconstructed as follows:

As a rule, the direction of writing is from right to left; but some graffiti on vases often show the opposite direction.