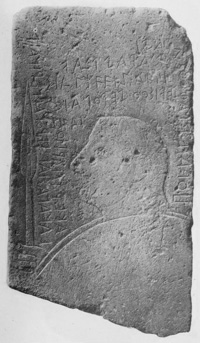 The Lemnian language was transcribed using a writing system deriving from a Greek alphabet of the ‘red’ western type, with a number of adaptations. For example, the necessity of expressing two different sibilants led to the addition of a straightened 3-bar variant, whose central bar is arranged vertically, alongside the normal 4-bar sigma.

The probable analogy with Etruscan phonology allows us to suppose that the straightened sigma (which is generally transcribed as s) was used to mark the simple sibilant (pronounced like s in seed), since it was used for the terminations of the genitive and pertinentive cases (-s, -si).

As a consequence, the 4-bar sigma (transcribed as ś) was probably used to mark a palatal sibilant (perhaps as sh in shame).

As in Etruscan language, Lemnian did not use voiced stops /b g d/ and felt no difference between the sounds /u/ and /o/; but unlike the writing system of Italy, the choice went to the omicron, dismissing the use of ypsilon.

As in the Etruscan language, Lemnian did not use the voiced stops /b g d/ and did not differentiate between the sounds /u/ and /o/; but unlike the writing system of Italy, the omicron was chosen, and the ypsilon was not used. The use of the aspirated stops φ χ θ is identical to that of the Etruscan language, but unlike the latter, there are no marks to be used for the sound /f/ (that in archaic Italy was transcribed at first by the group hv or vh, and then by the letter shaped like an 8). It is thus possible that the Lemnian language did not need to mark that sound (which would be a significant difference from the Etruscan language). Alternatively it could mean that in writing the sound was assimilated to the aspirated stop φ (as could be hinted by the lexical correspondence between Lemnian naφoθ[s] and Etruscan neftś).

From this information, even if an actual abecedarium is still missing, we can reconstruct a theoretical alphabetic sequence:

It is worth noticing that in some websites and publications on Lemnian inscriptions a different graphic convention is used to transcribe the sibilants, respectively transcribed as s and z.

The direction of writing is generally from right to left, but there are some cases of boustrophedon writing, as in the dedication from the archaic sanctuary at Hephaistia (in the area of the theatre), which goes from right to left in the second line (to be read first) and from left to right in the first line.

In longer texts, at Kaminia as well as Hephaistia, the punctuation is regularly marked by three dots, save when the end of a word coincides with the end of a line.

In favor of the former hypothesis there is mainly the use of the trident-shaped chi, according to the tradition of the western ‘red’ alphabet types (such as the Euboean-Chalcidian alphabet), which spread to Italy. This is different from other writing systems of the north-Aegean, usually compliant to the ‘blue’ type, using different shapes of chi.

Nevertheless, apart from this common feature, several dissimilarities divide the Lemnian and Etruscan writing systems. For example the choice of omicron instead of ypsilon for the close velar vowel, and also the straightened shape of sigma, with the vertical central bar. On the contrary, Etruscan writing distinguished the two sibilants by means of sigma and tsade, or at the most, in the Caeretan area from the end of the 6th century BCE, 3- and 4-bar sigmas, but never of the Lemnian type.

A significant feature could be syllabic punctuation: in fact, if its presence in the stele of Kaminia is confirmed (C. de Simone, G.F. Chiai, 2011), it would be certain evidence of the contact between Etruscan and Lemnian scribal traditions.

All things considered, at this moment the most likely hypothesis is that Lemnian writing is an independent creation of the Aegean area (L. Agostiniani 2012), and that the trident-shaped chi is a variant, that is to say an element of the ‘red’ graphic tradition, which entered within an alphabet that in the main is compliant with the ‘blue’ tradition.

Of course, new epigraphic discoveries and achievements could provide further matter for research on the subject.