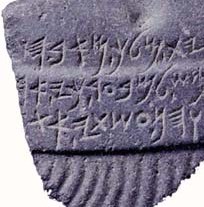 Of Phoenician origin and alphabetic nature, the Moabite writing system is composed of 22 linear consonant signs, written from right to left. On the palaeographical level, its most evident feature is the overall tendency to round off to the left the long stroke of b, k, m and n. According to G. Garbini, this may hint at least to the mediation of the scribal practice documented in the kingdom of Israel as the origin of Moabite handwriting; direct and conscious imitation is also actually not excluded as an alternative explanation. If we accept this proposal, then, the long rule of Israelite kings on Moab, attested both in the Hebrew sacred writings and the Meša stone, would provide the immediate historical context of this cultural interaction. The epigraphic records include the already mentioned Meša stone, a few fragments of monumental inscriptions dating approximately to the same period, and a handful of seals carved between the 8th and the 6th century BC.