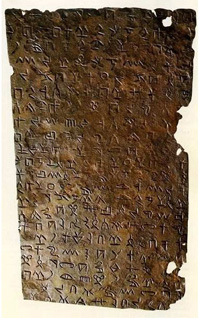 A small group of texts – written in a then unknown script – was discovered between 1928 and 1932 during archaeological excavations at Byblos. The first of these inscriptions was published in 1929, but the editio princeps of the whole corpus was published only in 1945 by M. Dunand (Byblia Grammata, Beyrouth 1945, 71-138). Scholars called this new linear script “pseudo-hieroglyphic” for the slight resemblance of its signs to Egyptian hieroglyphs. In 1978 M. Dunand added to the corpus of the “pseudo-hieroglyphic” inscriptions some others fragmentary inscriptions on stone not previously published (cfr. M. Dunand 1978).

“Pseudo-hierogliphic” writing is to be considered as still undeciphered since none of the decipherment attempts made until today having obtained unanimous positive consensus by scholars.

Corpus of the “pseudo-hieroglyphic” inscriptions of Byblos

According to Dunand 1945, the inventory of all the published hieroglyphic inscriptions consists of 114 signs. The longer and almost complete texts – the two bronze tablets – use 74 different signs, while the remaining inscriptions (shorter and more fragmentary) add another 30 signs to the former inventory.

Concerning the inventory of the signs, two important remarks should be made. The 114 signs recognized by Dunand do not necessarily form the complete inventory of the signs used by this writing system, and – in the meantime – some signs, originally considered as different by Dunand, could be regarded as graphic variants of the same sign.

The direction of writing is generally from right to left, but a couple of spatulae, engraved on both sides, show a different script direction on each side. The stele g displays a vertical column orientation of writing. The reasonable, but not too high, number of signs of Byblian “pseudo-hieroglyphic” writing excludes the possibility that this writing is an alphabetic one; neither does a strict logographic writing system appears likely. In all probability Byblian “pseudo-hieroglyphic” writing is a (mainly) syllabic writing system.

M. Dunand (1978, 59), based largely on the archaeological context and thanks to the comparison with the hieratic script, suggests a date from the 19th to the first half of the 18th centuries B.C. He however does not exclude the possibility that these inscriptions may be more recent. According to Mendenhall (1985, 7) these inscriptions would date from about the 24th century B.C. or somewhat later. J. Best, according to his very doubful deciphering, dates the bronze tablets to the 17th century BC. Several other dating suggestions have been offered.

The graphic form of the signs as well as the cultural context of Byblos point to a connection between this and Egyptian writing. The linear form of the signs, sometimes similar to the oldest Phoenician letters, also suggests a close link to an early linear alphabetic tradition.

After further limited studies by other scholars, G.E. Mendenhall put forward a comprehensive decipherment attempt in 1985 (The Syllabic Inscriptions from Byblos, Beirut, American University of Beirut). He interpreted the signs trying to connect them with hieroglyphic and with early alphabetic letters with similar shapes. According to Mendenhall, the “pseudo-hieroglyphic” script would have had at most thirty consonant signs, each with the corresponding vowel notation (a, i, or u), for a total of at most about 90 signs. Therefore he made a substantial reduction of the number of signs, identifying 26 different consonant signs for a total of 63 consonant+vowel signs. Moreover, assuming that the language was an archaic form of North-West Semitic, he also formulated a translation of the longest texts. Mendenhall’s decipherment attempt, however, was accepted by very few people (e.g. B.E. Colless) and abbandoned by most scholars (see the review of Mendenhall’s book by G. Garbini, W. Röllig, W.L. Moran, S. Izre’el). B.E. Colless considered Mendenhall’s decipherment essentially correct and in some articles in Abr-Nahrain (from 1992 to 1997) tried to improve Mendenhall’s decipherment and provided a full translation of the texts.

A different decipherment attempt was offered by J. Best who connected the “pseudo-hieroglyphic” writing system with Egyptian hieroglyphs and with Cretean linear A (Best 1989). He decoded the alleged language in the light of peripheral Akkadian. That line of thought was followed by F. Woudhuizen (2007) who introduced considerable changes to Best’s proposal, especially suggesting a much wider use of logograms. Woudhuizen’s proposal, however, was refused by Best himself (see Ugarit Forschungen 42, 2010, 34).

Currently, due to the insufficient epigraphic material available, it is not possible to accept any of these decipherment proposals; suffice it to say that the text on the c tablet was interpreted as a marriage contract (Mendenhall), or a dedication (Best), or a remedy against vomiting (Garbini).