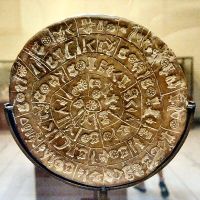 Phaistos Disc (side A). Archeological Museum of Herakleion.

The Phaistos Disc is a terracotta disk from the Palace of Phaistos in Crete, kept at the Archaeological Museum of Herakleion. Both faces of the disk are covered with spiral sequences of signs pressed in the soft clay before firing. The disk comes from a disturbed context and is therefore very difficult to date stratigraphically. However, comparisons with Minoan objects and in particular with potteries and seals from Phaistos, in addition to removing suspicions about the authenticity of the inscription, suggest a date between the final phase of the First Cretan Palaces and the early phase of the Second Palaces (18th-17th centuries BC).

The disk was found on 3 July 1908 in a room in the northeast area of the Palace of Phaistos in association with ceramic materials which can in part be attributed to the final phase of the first Cretan Palaces (18th century BC) and in part to the Hellenistic period.

45 different signs can be found on the disk. This has led to the hypothesis that the writing was syllabic. In fact, statistically, 45 symbols are too many for an alphabet and too few for an ideographic system. The writing on the Phaistos Disc would therefore seem to be a syllabary, like the Cretan hieroglyphic, Linear A or Linear B. The sequences of signs, thirty on one side and thirty-one on the other, are preceded and followed by straight lines which “box” them inside the two spirals. Rare cases of partial overlapping between signs indicate that they were pressed from the outside towards the inside. The sequence of the signs is thus right to left, and they were stamped into fresh clay using pre-prepared forms. Some of the signs were then marked with the incision of a short straight line (the so-called 'spina').

There are some similarities among signs on the Phaistos Disc and other Cretan writing systems from the 2nd millennium BC. These correspondences, however, are very uncertain and do not show any definite relationship with these graphic systems.


Origin of the writing

Some analogies can be found between some signs on the disk and a number of archeological objects or symbolic motifs typical of Bronze Age Crete, some of which are from Phaistos. This tends to favor the hypothesis of a Cretan origin of the writing and to confirm the authenticity of the inscription.

Many attempts have been made to decipher the Phaistos Disc (especially in a religious sense or as a calendar), but none can be considered conclusively valid, since in the absence of similar inscriptions, no proposed decipherment can be verified.