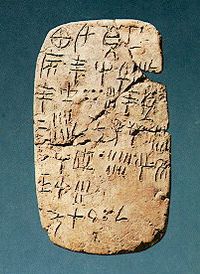 Linear A is a non-deciphered script, found on Crete, in the Aegean islands and, sporadically, on the Greek Mainland and the western coast of Asia Minor from the 18th to the 14th centuries BC. During the so-called First Palace period (19th-18th centuries BC) it is found almost exclusively at Phaistos (some traces have been found at Knossos as well). During the Second Palace period (17th to 15th centuries BC), it is present throughout the island and in various areas of the Aegean world. After the creation of Linear B, it ceased being used for administrative purposes. It is last found in about 1350 BC (inscription painted on a terracotta figurine from Poros Herakleiou).

Origins of the writing

Linear A has no antecedents outside Crete. It is therefore probably a local creation, in part inspired by the general principles of near-east writing systems.

The archival documents register economic transactions (movements of goods in and out of storerooms). The inscriptions on stone vases (the so-called “offering tables”) mostly come from sanctuaries and are repetitively formulaic. They therefore seem to relate to religious topics. The same is probably true also for inscriptions on clay vases, terracotta figurines and metal objects that come from cultic or funerary contexts. It is also possible that some of these were “private” inscriptions. The inscriptions on clay vases used to store goods probably had an economic purpose, as can be deduced from the fact that they sometimes contain logograms and numbers.


Areas where inscriptions are found

Inscriptions in Linear A have been found in many different areas of Crete [clickable map], in various Aegean islands (Kythira, Kea, Milos, Santorini and Samothrace), in a few places of Mainland Greece (Agios Stephanos in Laconia and, perhaps, Tiryns in Argolis) and at Miletus in Asia Minor.

Archive documents have been found on Crete (in the sites of Archanes, Khania, Knossos, Phaistos, Gournia, Agia Triada, Malia, Palaikastro, Papoura, Petras, Pyrgos, Tylissos and Zakros) and on the islands (in the sites of Agia Irini in Kea, Phylakopi in Melos, Akrotiri in Thera and of Mikro Vouni at Samothrace). Inscriptions on stone vases have been found mostly in sanctuaries (Mount Iouktas, Petsophas, Psykhro, Symi Viannou, Troullos, Vrysinas), and less frequently in urban contexts (Apoudoulou, Knossos, Nerokourou, Palaikastro, Prassa).The only example not of Cretan origin was found at the site of Kastri on Kythira. Inscriptions on clay vases come from Crete, from the islands of the Aegean Sea (Kea, Melos and Thera) and from Asia Minor (Miletus). Inscriptions on metal objects are all of Cretan origin.


Possible Linear A inscriptions outside of the Aegean area

Linear A inscriptions have been reported for the sites of Tel Haror and Tel Lachish in Palestine, and for that of Drama in Bulgaria. The inscription of Tel Haror is engraved on a fragment of clay vase and is datable from the 17th to the 16th century BC, the one of Tel Lachish is engraved on a fragment of stone vase and is attributed to the 12th century BC, and the one of Drama is engraved on a sort of little clay “reel” and it cannot be dated with any precision. In all three cases, there are doubts about the identification of the writing. The palaeographic anomalies, considered together with the geographic and chronological incongruities, mean that the greatest caution must be used while identifying these inscriptions.


Linear A inscriptions on papyrus or parchment?

The curving form of many Linear A signs has suggested the idea that this script was more suitable to be traced with a brush onto sheets of papyrus or parchment rather than being engraved on clay. A possible clue about the existence of documents in Linear A on perishable materials can be found in the marks present on the sealings called “flat-based nodules”. These nodules, found in large quantities especially in the Cretan sites of the Second Palace period, have the marks of one or more seals on the upper side and on the lower side unequivocal marks of sheets of papyrus or parchment tied up like a parcel.

In 2016, in a cult building near the Knossos palace two inscriptions were discovered, both engraved on ivory: a ring with a diameter of about 14 cm and a bar of about 13 cm with a quadrangular cross-section. Both inscriptions are still unpublished. According to the limited preliminary information, signs and logograms are placed inside separate boxes as in the Phaistos Disc. In addition, the characters have a calligraphic appearance and are reminiscent of those engraved on the offering tables. Compared to the latter, however, they have a more naturalistic style, similar to the characters engraved on the "Hieroglyphic" seals. The two new inscriptions will certainly have important repercussions for the palaeography of the Aegean scripts.

Linear A, like the other Cretan scripts from the Bronze Age (Cretan Hieroglyphics and Linear B), is a logo-syllabic script, i.e., made up of logograms and syllabograms. The first are signs which correspond to words, the latter correspond to syllables. Some syllabograms are used in isolation in archive documents, and these are conventionally given the name of "transaction signs" because it is believed that they indicated the nature or the circumstances of the transactions being registered. The Linear A syllabary, as it is currently known, is composed of 97 signs (some of which are also used as logograms). For statistical reasons, it is probable that every syllabogram corresponds to an open syllable, i.e., a syllable formed by a vowel or by a consonant + vowel sequence. About fifty logograms have been identified until now,  representing men, animals, objects and goods. In addition to these, four symbols for numbers (1, 10, 100 e 1000) and 17 for fractions (of uncertain value) are currently used. Often syllabograms, logograms and symbols for fractions combine among themselves, creating the so-called “ligatures”, of which 150 examples are known to date. The inscriptions in Linear A are usually left to right (always, in archive documents), but there are cases of right to left or boustrophedon inscriptions. Since Linear A is not deciphered, texts in general are not transliterated but rather transnumerated: i.e., every sign corresponds to a number in a conventional order (see "List of symbols").

Documents in Cretan hieroglyphics are datable from the 18th to the 17th century BC. Cretan Hieroglyphics and Linear A are therefore in part contemporaneous writing systems. The fact that only about 20% of the syllabograms of the two writing systems are homomorphic excludes any hypothesis of filiation. The resemblance of the logograms and of the signs for numbers and fractions, on the other hand, is an indication of the reciprocal exchanges in bookkeeping practices. It is not clear why these two distinct writing systems were used for similar purposes on Crete for a certain period of time. And even less clear is why in a couple of cases (Malia and perhaps Knossos) texts drawn up in the two different scripts were found in the same archive.


Relationships with Linear B

Linear B, found on Crete and on the Greek Mainland from the 15th to the 13th century BC, has more than 70% of its syllabograms in common with Linear A. There is no doubt, then, that Linear B derives from Linear A.


Relationships with the Cypriot syllabaries