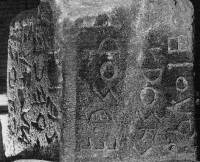 Latin is an alphabetical writing attested from 7th-6th century BC in Latium vetus and spread in the lands conquered by the Romans. It was also sometimes used for other languages of ancient Italy, such us Umbrian in the tabulae Iguvinae and Oscan in the tabula Bantina. The Latin alphabet comes from the Greek alphabet through Etruscan intermediation. In the classical period the Latin alphabet was formed by 23 letters.

The date of the oldest inscriptions in Latin and their classification as early evidence of Latin or other Italic writing (an example is the Lapis Satricanus) is often uncertain. Among the earliest inscriptions the following are worth considering: the inscription from Gabii and the Tita Vendia vase (end of 7th century BC), the Praeneste fibula (end of 7th century BC, of dubious authenticity); the Duenos inscription, the Lapis Niger and the Lanuvium tablet (6th century BC). These archaic inscriptions show that the left-to-right writing direction (afterwards a standard) wasn’t yet consistently adopted: for example, the Praeneste fibula is written right-to-left whereas the Duenos inscription and the Lapis Niger are boustrophedon.

This evidence also shows that the same writing style, similar to Greek (for example, the letter R was still written as Ρ as in Greek), was used both in public and private contexts. Around the 4th-3rd century BC the Latin writing became similar to the one that is still in use nowadays and developed two graphic strands: the first one was a steady, monumental and geometric font, used for public inscriptions engraved with a chisel (epigraphic capital), but also for literary production on papyrus or parchment using a calamus or later a quill pen (book capital). The second graphic strand was a cursive font, easier to write and with simplified strokes, meant for everyday use in a private context or for administrative writing, written with an engraving tool (“by graffito”) on hard matters or with a stylus on wax tablets (ancient cursive). In the 3rd century AD a new kind of alphabet arose: letters were no longer written in a bilinear scheme, but in a quadrilinear one, with ascenders and descenders. This new kind of script was used both in the manuscript book and in the cursive writing, giving rise to new styles of scripts (uncial, semi-uncial, new cursive).

Most European and western alphabets (not only for neo-Latin languages) come from the Latin alphabet, with graphic variations that developed during the Middle Ages. Roman colonization led to the adoption of the Latin alphabet in Asian, American, African, and Pacific languages. In this period, several languages without their own writing system got a written form for the very first time thanks to the Latin alphabet.

[A] History of the alphabet

[B] Writing materials and Academic disciplines

The Latin alphabet comes from the Greek Euboic, probably via Etruria. “The fact that the Latins gave a phonological value to Greek letters that were not used by the Etruscans (Δ=d, O=o, Χ=cs) can be attributed to Greek influence. Nevertheless, Etruscan intermediation is necessary in order to understand how the Latins received the velars" (M. Cristofani, Scrittura e Civiltà 2, 1978, 15). The letter C, which in the Latin alphabet is the third letter, has the sound /k/, the same as in Etruscan. Its shape comes from the Greek gamma in its Chalcidian form (which was in fact similar to the modern C), which has the sound /g/ and not /k/. Several letters changed their sound, like koppa that became /q/, the intervocalic digamma that became /f/, losing its half-vocalic value, ypsilon that became a back vowel /u/ or half-vowel /w/; H indicated the aspiration as in the Greek alphabet before Euclid's reformation. Θ Φ Ψ were not used as letters, but as numbers (Θ > C = 100, Φ > M = 1000 [and the half sign D has half the value = 500], Ψ > L = 50).

The archaic Latin alphabet consisted of 20 letters (from A to X); the letter G was added in the mid-3rd century BC (by the freedman Spurius Carvilius, according to Plutarch, Quaestiones Romanae 54, 277d, and Terentianus Maurus GLK VII 15). The use of this new letter reshaped the way of writing velars. In fact, the use of the letters K C Q originally depended on the following vowel and the distinction between voiceless and voiced velars was not marked, so C could either indicate /k/ or /g/. In order to point out the difference, the sign G was inserted into Latin (through a modification of the letter C) and was used to denote the voiced velar, whereas C was only used for the voiceless one (although in the acronym C = Gaius it kept the original voiced value). As a result, the K-sign dropped out of use: it was only preserved in the archaic spelling for some words such as Kalendae (shortened as k or kal). These 21 letters were always recognized as the standard national alphabet (cf. Cicero de natura deorum II 93). Later on (at the beginning of the 1st century BC) the Z and Y signs were added in order to mark the Greek consonants that were previously transliterated with S-/-SS- and V. These signs were added to the graphemes PH CH TH used to transliterate the Greek letters Φ Χ Θ for a correct transcription of Greek words. Indeed, the letter Z already existed in the Latin alphabet (Velius Longus GLK VII 51) holding the same position later taken by the letter G (as in the Greek alphabets). This letter though was used to mark the voiced sibilant /z/, a sound replaced by rhotacism during the 4th century BC, which caused the letter to became obsolete.

Ancient inscriptions did not use double consonants: according to the tradition, the poet Q. Ennius (3rd-2nd century BC), based on the Greek model, introduced this spelling system (Festus p. 374, 7-9 Lindsay).

The origins and the development of the Latin alphabet were the topic of the essay de antiquitate litterarum (frr. 1-2 Funaioli), written by the scholar M. Terentius Varro (1st century BC). This work is lost, but it is the probable origin of information contained in the works by imperial grammarians.

The Latin alphabet remained unchanged throughout Classical antiquity and the Middle Ages, up to the adoption of the letters J and U proposed by Petrus Ramus (16th century). All the spelling reforms proposed by ancient scholars, though appropriate in theory, failed to spread. In the 2nd century BC, the playwright and grammarian L. Accius recommended using G for the sound /n/ before the letters G and C as in Greek and the gemination of vowels to mark quantity, as usual in Oscan. Latin spelling used the apex [Á = ā] sporadically but marked the difference between ĭ and ī, the latter one being written EI or with a longer I (frr. 24-25 Funaioli). Accio’s proposal was criticized by the satirist Lucilius (352-355 M.). Verrius Flaccus, teacher of Augustus’ nephews, failed in imposing the use of a half-M symbol to mark the ending nasal sound before a word beginning with a vowel (Velius Longus GLK VII 80). The three new letters introduced by the emperor Claudius were almost immediately discarded after the emperor's death (Tacitus Annales XI 14, Suetonius Claudius 41, 8). The king of Franks Chilperic I tried something similar in the 6th century AD: by adding four new letters for sounds which were peculiar to Germanic phonetics (Gregorius of Tours V 44). This was the first official attempt to adapt the Latin alphabet to the new languages of Medieval Europe.

There are several different materials on which Latin was written. Less perishable supports are pottery and metals. On these supports, letters were either impressed (before finalizing the wares in the oven, vel sim.), or carved, as happened for example with pottery and stone (after being carved on stone, letters were frequently painted in red). Mosaics bear examples of writing as well, even if they usually present shorter texts.

Among more perishable materials, there are wooden tablets. They were either covered with wax so that letters were carved on it, or they were painted in white so that writing was subsequently added on it (e.g., the tabula dealbata). The most famous tablets are those from Pompeii, Ercolano, Transylvania and Vindolanda .

Stuccos were similar to tablets as concerns the ease of writing. Linen was widespread in Etruria but less popular in Rome, where it mainly was used for texts pertaining to the sacral and religious sphere (e.g. augurs). This shows the Etruscan influence on those spheres of Roman religion. Linen seems not to have been used after the 3rd century B.C. Starting from 1st century A.D. we have documents written on papyrus (although certainly it was used before as well), while parchment came into use only later on (the oldest example could be the fragmentum de bellis Macedonicis dated to around 100 AD, CLA II2 207). Papyrus and parchment could be either in the form of a scroll or of a codex.

Latin writing differed greatly depending on chronological, substantial and material factors. A «histoire de l’écriture d’après tous les documents graphiques, sur quelque matière que ce soit » (L. Robert) has not been written yet. There are different disciplines that concern Latin writing.
Latin writing per se, its history, evolution, value and use are topics studied by paleography. In this case the definition of written evidence is very comprehensive: stone, metal, codex, papyrus etc. The earliest treaties (those by J. Mabillon and the Marquis S. Maffei) used mostly epigraphic evidence. Their greatest contribution was a new, critical approach to ancient documents. Later, paleography made a shift towards documents where it is easier to detect the evolution of writing. This means where the writer could be more spontaneous and less formal, as for example on parchment as opposed to stone. In the mid 20th century, paleographers started being interested in epigraphy again, especially under the influence of J. Mallon's Paleographie romaine (Madrid 1952). Mallon emphasized how much inscriptions could be of interest for a paleographer, stressing the role of the ordinator. This man had to trace with ink the text that would have been subsequently carved.

Related disciplines, though independent, are epigraphy and papyrology. Epigraphy is focused on all inscriptions that were carved, with the exclusion of ostraca and those pressed. Papyrology considers ostraca (Latin ostraca are just a few) and papyri. This distinction is theoretical more than factual. Papyrology is de facto part of paleography, since it has a very scarce documentary basis.
For the earliest periods, paleography and epigraphy share the same evidence, with different perspectives. The latter considers the evidence in all its aspects (writing, support, historical significance), whereas the former looks just at writing; it is to be noted that this kind of evidence is first published by an epigraphist, and not by a paleographer.

Considering that paleography and epigraphy have different methods and perspectives, it is necessary for them to be in close contact, but it is not always easy (an interesting consideration of these topics can be found in Scrittura e Civiltà 5, 1981, especially the contributions by S. Panciera and H. Solin).